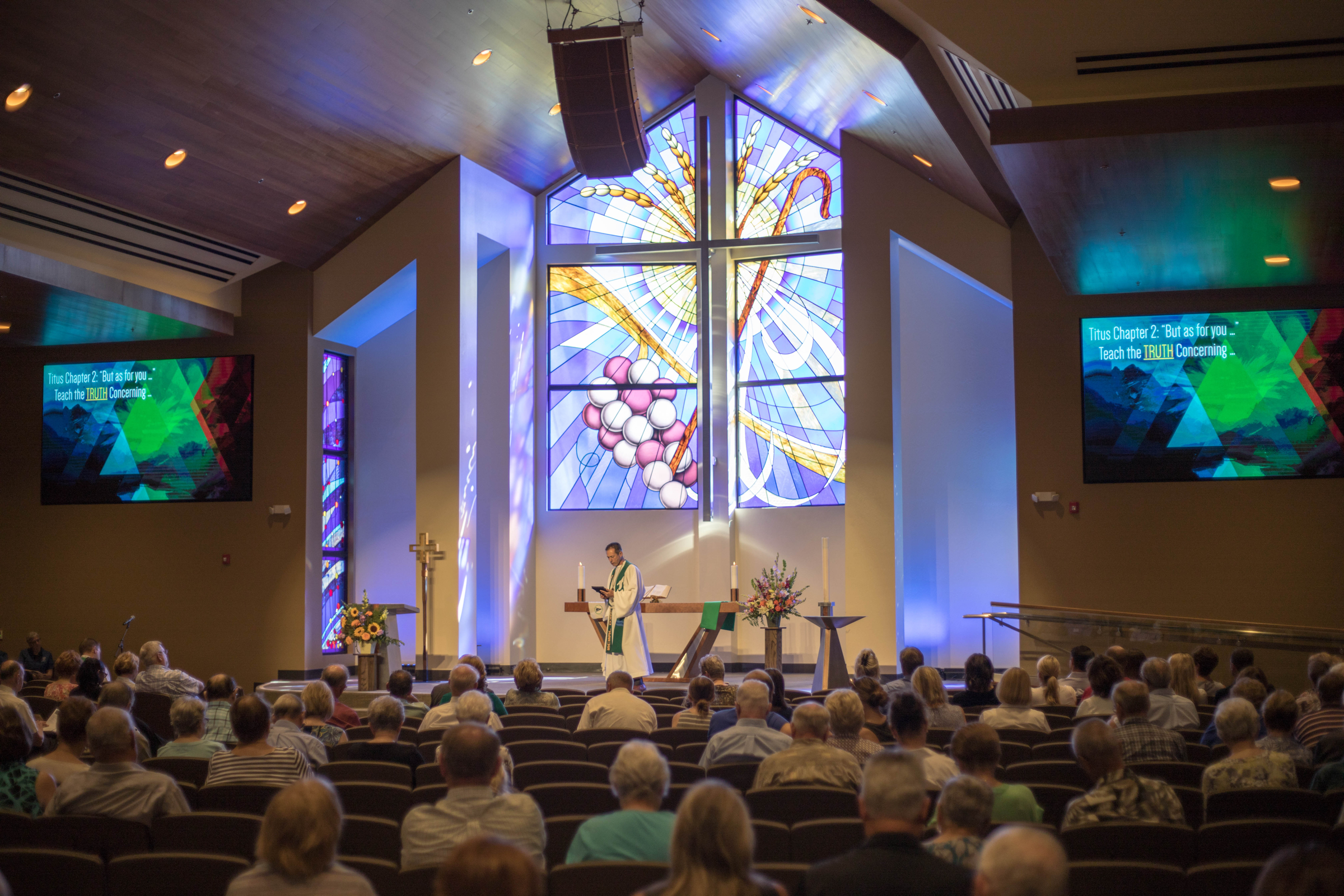 St. John’s has been a fixture in the city of Bakersfield, CA for over 100 years. Founded in 1901, the church has experienced consistent growth over the last century, 4 times needing to build a larger worship facility to house its congregation.  In 2010, their current worship facilities opened, complete with a state of the art, 850 seat Worship Center for contemporary services and an intimate, 200 seat Sanctuary designed for liturgical worship.  As the church has continued to grow, the Sanctuary was outgrown, and rather than tear it down and rebuild, the decision was made to remove the front wall of the building and move it out some 30 feet to increase it’s seating capacity to 300 seats.

A Lutheran Church who considers themselves traditional in their doctrine yet creative in their methods, the Sanctuary features many features you’d expect to find in traditional worship space.  An impressive, custom Bosch organ with 50 ranks of 56 pipes, Wolfram-designed cross, and stained-glass windows are just some of the features you’d expect to find in a liturgical worship space.  But true to their vision, upgrades to their Sanctuary brought the ability to be highly creative, blending the best of both liturgy and technology.

As the space grew in size, it was clear the technology systems were also in need of an upgrade. While the worship style in this room is very traditional and prefers an acoustically reverberant space for choir and organ, a key value was to attain significantly better speech intelligibility in the space. With the chancel backed by beautiful stained-glass windows, many of the technology decisions were driven by the high ambient light and challenging acoustic issues. Another high value was flexibility as the space will be used for a wide variety of functions throughout the year in addition to liturgical worship on Sundays.

A Bose RoomMatch system was chosen for its ability to precisely shape the audio coverage of the array to match the seating area while keeping the sound off the walls, reducing reflections.

A Yamaha QL1 was a natural choice to make digital mixing user-friendly, as the church already has an M7-CL in their worship center. With a Dante backbone in place, Shure ULXD-4Q wireless microphones integrate easily into the system while providing outstanding wireless audio quality, while DPA 4098 mic’s deliver crystal clear reinforcement for the choir.

Absen N4 series LED walls provided an ideal solution to the high ambient light levels generated by the 30’ tall stained-glass windows directly behind the chancel. The 4 mm pitch screens deliver crisp, clear images with more than enough brightness to overcome the ambient light, even while running at 40%. A Roland XS-84H matrix switcher acts as a scaler, switcher and router all in one, making it easy for the volunteers to route any video input to any of the 4 video destinations around the venue (2 LED walls, confidence monitor, organ monitor).

The stained-glass windows provide impressive backlight for those on the chancel, but it also meant bright front lights were required for the eight lighting zones on and around the Chancel. The introduction of the Chauvet E260-WW came just in time to deliver the equivalent output of a 750 watt ellipsoidal solution in a much more power-friendly LED package.  House lighting is one of the areas that the St. John’s Lutheran team’s creativity kicked in, as they opted for full flexibility with their house lights in going with a full color, RGBW LED house light.  In addition to meeting California’s stringent energy codes, the HL Series full-color, LED house lights from The Light Source were up to the challenge of providing a high-output and extremely uniform coverage over the entire room

Rounding out the technology upgrades were audio and video distribution to the narthex, with video reinforcement being handled by two Sharp 60” displays and audio coverage being delivered via Martin Audio C4.8T ceiling speakers.